Derwent Water is one of the main lakes in the Lake District National Park in the northwest of England. It is located in the Allerdale district of Cumbria. 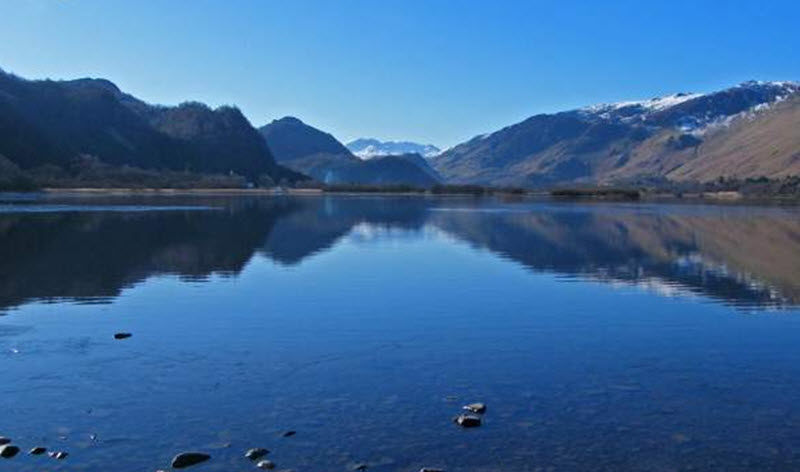 The average depth is 5.5 m, but at the deepest point in the lake it is 22 m deep. There are a total of 13 islands in the lake, four bigger ones plus nine smaller.

In Derwent Water there are four islands but only one of them is inhabited.

All the islands are owned by the National Trust, as is much of the shoreline.

Derwent Island House is an 18th-century residence. The house is rented out, but five days a year it is open to the public.

At the end of the summer there is one floating island that will appear sporadically.

Derwentwater Lake has beautiful scenery. The lake is surrounded by hills and scales, many of them have trees growing on them.

There are seven marinas by the lake. A long jetty juts out from the beach and from there there are boats that take passengers between the different places. The most popular stops are: Keswick, Portinscale and Lodore Falls. It is possible to rent boats from all those places.

Many visitors come to Derwent Water to hike in nature. Among the hills and forests there are hiking trails that surround the lake.

There are regular buses between Keswick and Borrowdale, which run along the east shore of the lake.

There is a minor road along the west shore that connects the villages of Grange and Portinscale.

The lake could be the last remaining domestic habitat for the fish species vendace.

In the 16th century, the site was used as a landing site for the local mining industry.

During the 18th and 19th centuries, it inspired many poets.

A little further away from the boat landings is Friars Crag. It is said that from there the pilgrim monks sailed to St Herbert’s Island where they said that the saint was living.

Derwentwater Walk is a 16 kilometer walk around Derwentwater. It runs through the forest and along the shore around the lake. There are both cafes and restaurants along the way. There is a sculpture of a pair of hands erected at the celebration of National Trust’s care of Brandelhowe’s 100th anniversary. This wooden sculpture of cupped hands celebrates the centenary of the National Trust’s first land purchase ever in the Lake District, 108 acres of the Brandlehow estate.

Brandelhow was purchased with money raised through a public subscription. One of the founders of the National Trust, planted a tree at the official opening of the Brandelhow to the public in October 1902.